Spa of the Year

It has been a year for celebrations as the V Spa wins its second award of 2022, this time taking the title of “Spa of the Year” in the Irish Hair & Beauty Awards.

In January of this year The V Spa, set within the Villa Rose Hotel, Ballybofey was named as one of Ireland’s Top 10 Spas in The Irish Independent Reader Travel Awards alongside other prestigious spas such as the Powerscourt Spa, Galgorm and Monart.

While the V Spa has long been recognised as one of the North-west’s leading spas, to get the recognition as one of the best in the country for the second time this year is something extremely special for them.

The V Spa, set within the Villa Rose Hotel has this week been named as one of Ireland’s Top 10 Spas in The Irish Independent Reader Travel Awards.  The Independent asked readers to submit nominations in a number of categories including Ireland’s favourite spa.  Entries were open to all readers in Ireland and overseas.  After entries closed, the top nominees were tallied and an expert judging panel adjudicated on the readers’ shortlist.

The V Spa has long been recognised as one of the North-west’s leading spas, therefore, to get the recognition as one of the best in the country is something extremely special for the entire team.  Our spa therapists are known for their high level of advanced training and are extremely dedicated in everything they do”.

2022 is set to be a year of innovation and advancement within the V Spa with several exciting therapies being added to the treatment menu.  The official opening of their Medi Spa is set for the spring as well as the inclusion of Touch Therapy Treatments including Cancer Care Reflexology.

The V Spa is part of the Gallen Hospitality Collection of Hotels which includes The Villa Rose Hotel, Jackson’s Hotel & An Chuirt Hotel.  2022 will see an extensive refurbishment of bedrooms and the Spa at An Chuirt to add to the newly opened Fara Og’s Bar & Restaurant.

The team at The V Spa and indeed the Villa Rose Hotel are delighted to receive this accolade and thanked their followers and guests for voting them as one of the top spas in the country. 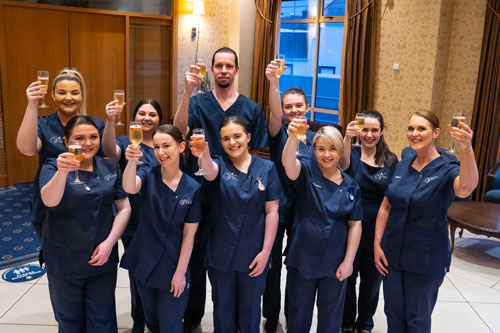